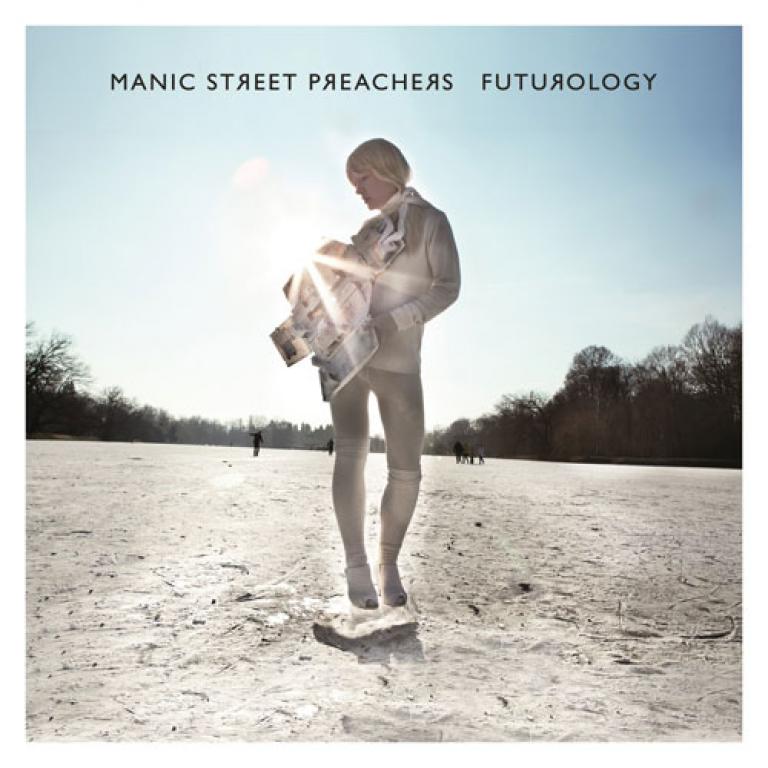 Futurology – Notes From The Band

What follows is an ongoing series of stream-of-consciousness notes on the forthcoming 'Futurology' album, from the people who know it best, Manic Street Preachers.

Notes From The Band Pt.1: 'Futurology'
“Lyrically uplifting – faith in self generated ideas – ‘the good will out – rock‘n’roll will return’ – a statement of existential socialism – belief that humanity is still a viable ideal. Motorik drums – Cian Ciarán (SFA) on keys and sounds – Bowie’s futuristic R&B/Berlin beat – recorded in Hansa & Faster – a rock version of the retro-futurism of Stereolab.”

Notes From The Band Pt.2: 'Walk Me To The Bridge'
“Originally inspired by driving across the Øresund Bridge that joins Sweden & Denmark – a sense of motion, life and memory flashing by in a stream of consciousness – connections – the Die Brücke movement – Greil Marcus – the idea of bridges allowing you an out of body experience as you leave and arrive in different places – Heroes EBow guitar solo – This Is The One – classic Manics single – early Simple Minds synths – emotional European driving song – the fatal friend is the band – life – music – everything. Eat Lights Become Lights’ shining synth beacon had been influencing James at this point.”

“Final part of You Love Us/Masses Against The Classes trilogy – Faith No More/Andrew Weatherall’s mix of Peeled Apples – unending desire for conflict within us & society – confronting ourselves – Cate le Bon and H. Hawkline on chorus backing vocals – Album-era PiL guitar line – a message to ourselves, a call to arms – the upper classes have turned rock’n’roll into a career path devoid of any desperation or desire to revolt – let's go down in flames trying – an exercise in tension.”

Notes From The Band Pt.4: 'The Next Jet To Leave Moscow'
“The heartbeat of the album. Post punk power pop – Bill Nelson – dragging your past around with you – Cuba, 4 real, old songs etc. – dislocation of your own history, the baggage of having an opinion – Cian Ciaran adds keys & noise.”
Notes From The Band Pt.5: 'Europa Geht Durch Mich'
“‘Europe passes through me’. – an industrial/dominatrix Nut Bush City Limits – the POSTPUNKDISCOROCK of This Is Not A Love Song. Features Nina Hoss (Barbara/We Are The Night/A Most Wanted Man) – echoes of Goldfrapp’s Strict Machine – so much too see, beauty failure hope excitement otherness – the relief of breathing in another country – scale culture language motion – the joy of observation – movement as salvation.”
Notes From The Band Pt.6: 'Divine Youth'
“Featuring vocals and harp by the enigmatic/Welsh Music Prize winning Georgia Ruth – post Video Games space rock ballad – the lyrical rhythms of Space Oddity – celestial – imperial era ZTT/Propaganda’s Duel – the branding of youth, the corporate ownership of revolt and coolness – the loss of daydreaming, the virtual evolution of now – the collection and collusion of information by massive digital companies and the state.”
Notes From The Band Pt.7: 'Sex, Power, Love and Money'
“Musically we tried to fuse Nirvana/Undercover Of The Night/The Skids – tried to distil comment down to the four most powerful words and drivers in modern society – all the rest are crushed by these concepts for better or for worse. Verse meant to sound like a Joe Strummer/Mick Jagger rap that moves into an old school gigantic Manics chorus + vintage JDB guitar solo.”
Notes From The Band Pt.8: 'Dreaming A City (Hugheskova)'
“Instrumental – music as soundtrack to motion, glorious failure in the past – utopia gone wrong – Hughesovka – monumental Derek Forbes bassline – Sons and Fascination era Simple Minds – Theme For Great Cities – John McGeoch guitars – when ideas transform majestically into improbable physical reality.”
Notes From The Band Pt.9: 'Black Square'
“‘Art is never modern for art is eternal’ – New Gold Dream-era Simple Minds – Malevich and the power of art to draw a line in the sand and start again – independence self-control – resisting the massification of society. The dead-eyed stare of the establishment and their privileged warped morals. In places, literally the sound of Berlin as recorded on Sean's iPhone.”
Notes From The Band Pt.10: 'Between The Clock And The Bed'
“Glacial 80’s pop – Munch’s late period self-portrait – Green Gartside providing authentic, pure vocals and harmonies – echoes of Prefab Sprout (Steve McQueen), Thomas Dolby (The Flat Earth) and Colourbox – the struggle of morality the scary space between sleep and being half awake-repetition of images.”
Notes From The Band Pt.11: 'Misguided Missile'
“The storm and the stress – Cluster filtered drums – sound of Hansa – pursuit of self doubt and confusion – in-built ability to wreck life – US Cruise missiles in Europe – I can still fill your void – the will is there but is the capability? Popul  Vuh guitar solo with elegance and energy combined. “
Notes From The Band Pt.12: 'The View From Stow Hill'
“The unexpected – seeing the good in unfashionable places and people – the idea of history being real and tangible everywhere; the story of glory and despair, the abandonment of places in a post New Labour nightmare – the Chartists – three-dimensional hints of U2’s Unforgettable Fire – built around Can-esque drums and a haunting vocal line – a strangeness seeps through the song. Clark/Kreidler influenced.”
Notes From The Band Pt.13: 'Mayakovsky'
“Second instrumental – cyber spaghetti western that transforms into Robert Fripp madness – inspired by the words and angles of the man – Trans-Sibieran – Can’s Million Spiel – listening to Y Niwl & Tangerine Dream – the sound of internal saturation.”